The Iraqi football team qualified for the Athens Olympics by beating Saudi Arabia in a qualifier and people in Iraq started to get excited about this new, young and talented side, brought up by former manager Bernd Stange. The people in Iraq were becoming less interested with football because of the war in Iraq but when Iraq qualified people started to take more interest, like they did in 1986 when Iraq participated in the FIFA World Cup.

Their first game of the Athens Olympics was against Portugal on the 12th of August and Portugal were clear favourites. It looked like predictions were correct at first as Haider Jabber scored a horrendous own goal in the 11th minute which gave Portugal an early lead. People were feeling disappointed but only for five minutes as Emad Mohammed fired in a goal in the 16th minute and the Iraqi fans that travelled to Greece were celebrating like they had won the whole tournament. Iraq then took the lead through Hawar Mulla Mohammed; the right midfielder scored a wonder goal and Iraq were winning. Portugal then equalised and silenced the Iraqi fans through the young and inexperienced Jose Bosingwa. A few minutes later, Fulham's star player Luis Boa Morte was sent off and gave Iraq great hopes of doing the impossible. In the 56th minute, legend Younis Mahmoud scored and Iraq were playing fantastically, they started to defend for the rest of the game against ten-man Portugal. In the last minute Iraq were on the counter-attack and made sure of the win when Salih Sadeer scored a nice goal to seal the win for Iraq. This game is recognised as Iraq's greatest triumph of the modern game, beating a team who have reached the semi final of the World Cup and final of the European Cup in recent years.

Iraq were on a high and comfortably beat Costa Rica in their next group game through goals from Hawar Mulla Mohammed (once again) and a header from Mahdi Karim, both goals coming late on in the game. This secured Iraq's passage through the group stage.

They went on to lose the next game with Morocco 2-1 but it didn't matter as Iraq were already through to the next round. Salih Sadeer scored his second goal of the tournament to put Iraq into the lead but two quick fire goals from the Moroccans secured victory for them. 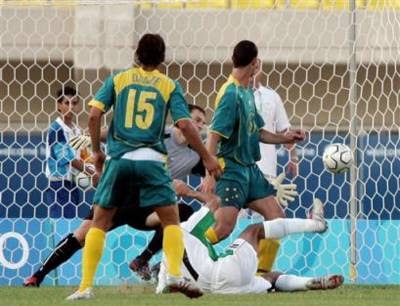 In the quarter-finals they would have to face tough opposition in Australia who had a number of Premiership players. It was close game but Iraq won with an amazing overhead kick scored by Emad Mohammed in the 61st minute to qualify for the semi-finals. Iraq were surprising everybody with their attractive football and good results but this game would be Iraq's final victory in the tournament.

Iraq were living the dream; they had reached the semi-final and they had to play against Paraguay. Sadly, Paraguay scored the first two goals of the game through Jose Cardozo; they were due to terrible goalkeeping from the usually excellent Noor Sabri. Paraguay got a third through Bareiro and although Iraq got a goal back through veteran Razzaq Farhan, they had been well-beaten and were not going to feature in the final of the tournament.

Although Iraq were out, they would play in the bronze medal match against 'The Azzuri' Italy with the chance of getting only Iraq's second ever medal at the Olympic Games. Sadly, the only goal of the game came from AC Milan striker Alberto Gilardino in the 8th minute due to unbelievably bad defending from Iraq. Iraq's defence was their downfall and if Iraq's defence could have been improved they would have been a much stronger side but, despite this, the future looked bright for Iraq. Most important of all, the Olympics gained more fans for Iraq and made them recognisable and the players also gained lots of valuable experience. It also helped with financial problems. The Athens Olympics was truly a great time for the Iraqi National Team.